Due to the general anaesthetic involved in the biopsy and examination (catch up on that here), I felt a bit off colour for a while after that procedure.  I think also that the realisation of what was going on was starting to sink in.  As I have mentioned though, this did not stop me from acquiring some additional lounge pants and, of course, that staple part of S/S 15 Cancer Chic: the silver hi-tops.

The next stage I needed to focus on was an MRI scan; following this, a full diagnosis, staging and treatment approach would be decided on.  This didn’t sound bad at all – I have previously already had MRI scans on my knee and brain, so the idea of it didn’t really phase me.  I have had experience of lying very still in a small, noisy tube and I know it isn’t all that bad.

However.  Little did I realise that this MRI scan wasn’t just an ordinary MRI scan.  Which meant that it only happened one morning a week at the Royal Marsden down in Sutton.  The next applicable day was already full, so I was booked in for the following week which seemed reasonable.  But that was forgetting my NHS VIP status!  Shortly after getting the original date I got a phone call to say that my scan had been moved forward to the week before on a Thursday.  The fact it was on a Thursday is significant because that is not the day that these scans are done on, so they had put in a special extra appointment to get me seen sooner.  What an incredible service.

Whereas a normal MRI scan lasts for around 20 minutes, the scan I was going to have was going to be in two sections, each lasting around half an hour.  The first part was the Special Bit; the part requiring a consultant to be present to carry it out.  This was an internal scan which would allow them to get a very clear picture of the cervix and surrounding area, and also take measurements which would be important in order to carry out the Radical Trachelectomy that the surgical consultant was hoping to perform.

I wasn’t too sure what to expect.  You don’t need a medical degree to decipher what ‘internal’ was going to involve, but that was about where my imagination/expertise ran out.  Getting set up for this special scan turned out to involve something that reminded me a bit of that game where you dangle a fishing rod with a magnet on the end and try to pick up fish with paper clips attached to them.  Only not quite so fun.  But the consultant was brilliant, and before I knew it I was being posted into the machine with a firm warning to stay still and a pair of headphones piping in Radio 1.  Before they started though, they came up to the head end and gave me an injection to relax my bowel as that could blur the images.  Apparently the shot can give you a dry mouth and blurred vision but wears off in about thirty minutes so it wasn’t really an additional worry.

After the first part I emerged and was allowed to get up and go to the toilet before round two.  This was a much more straightforward procedure.  A large plate was strapped on top of my torso so I felt a bit like some sort of sandwich; then I was slid back inside the pipe.  This scan was going to take more general images of the rest of my body.  It was quite relaxing after the first one!

For anyone who hasn’t had an MRI scan and is nervous about one, I’d like to reassure you that they are totally fine.  The space is a bit close, but if you lie with your eyes closed then you won’t even notice that.  I would definitely recommend having your eyes closed when you are scooted into it in fact, as that can feel a bit confined.  But overall, lying still for half an hour with your eyes closed listening to the radio in a warm room isn’t that bad!  Yes, the machine is noisy, but nothing unmanageable – especially if you are used to getting to sleep in London.

I don’t really remember a huge amount about this day now in general, but three things do stand out in particular: 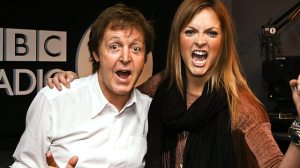 Usually I have quite a lot of common sense.  This sort of woolly-headed thinking has become known as my ‘moo-moo mode’.