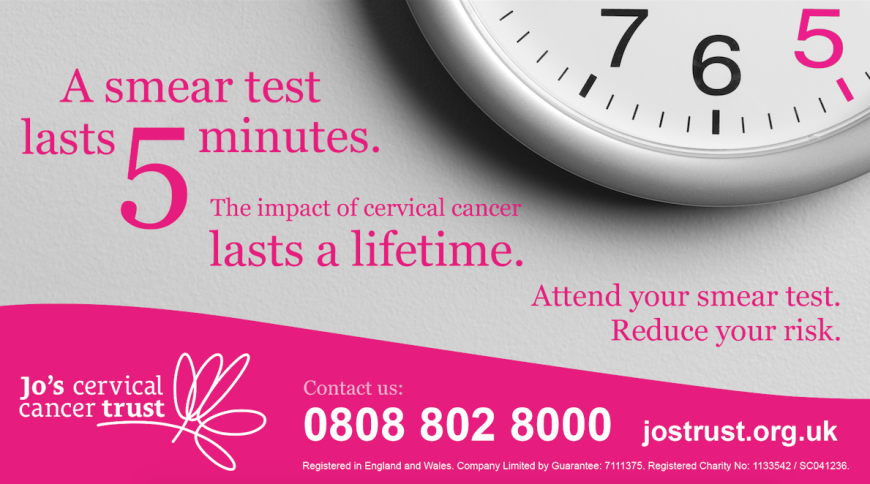 It just occurred to me that although I’ve mentioned Jo’s Trust several times in various posts, most people probably don’t really know what they actually do.  Added to which, a great friend of mine is running in their fundraiser next weekend so it seemed the perfect time to post about them.  And if that wasn’t a good enough reason, the cherry on the timing cake is that 15 – 21 June is Cervical Screening Awareness Week, an initiative led by Jo’s to promote the importance of cervical screening (aka smear tests).  Boom.

Jo’s Cervical Cancer Trust, to give them their full name, is the only UK charity dedicated to helping people affected by cervical cancer or other cervical abnormalities.  In a nutshell, they offer three things: information, support and friends.

Perhaps this doesn’t sound groundbreaking compared to what some charities do.  Let me assure you though, these services are absolutely wonderful and much needed.  According to Jo’s Trust figures, 22% of women in the UK don’t attend their smear tests.  Cervical cancer can be – and is – prevented and cured by cervical screening.  Public awareness is still low, so the charity’s awareness-raising agenda is crucial.

I was made aware of Jo’s Trust by my surgical consultant (who also happens to be a trustee of the charity).  At first, I had been given so much information, and everything was happening so out of the blue, that I didn’t look into it.  I believe this could be known as “ostrich syndrome”.

As soon as I was able to be interested in what was actually going on, Jo’s Trust quickly became my main source of information.  Macmillan and Cancer Research have got very helpful sections on their websites too which I also used, but I always found myself coming back to Jo’s Trust.

As well as comprehensive information, not just about cervical cancer but about all cervical abnormalities and procedures, Jo’s also has a forum where people can share their experiences, chat to others and ask for advice.  Although I’ve never posted, I have found it useful looking at what others have said about various situations.

Shortly after starting my blog, a friend of mine emailed me to say that she’d had an abnormal smear result and was going in for a colposcopy.  Understandably, she was nervous.  I sent her the link to Jo’s abnormal cervical screening and treatment sections which has all sorts of useful and reassuring information in it.  Following the appointment she was booked to have a LLETZ procedure, turning again to Jo’s information to find out what to expect.  She was very grateful to have everything laid out so clearly so that she felt more in control and aware of what the possibilities were, and I was grateful to have a reliable source of information and advice to recommend to her, rather than just trying to offer sympathy and support based on my own entirely different experience. 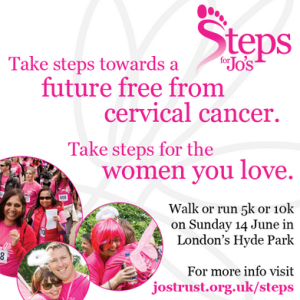 Next weekend will see Steps for Jo’s 5k and 10k sponsored walk/runs taking place across the UK, marking the beginning of Cervical Screening Awareness Week.  As I mentioned, my amazing friend Sarah and her fiance Rob are running on my behalf in the London run on 14 June.  I’m so grateful to them for helping me to give something back to Jo’s as a thank you for their support so far, even though I can’t do it myself at the moment.  If you fancy sponsoring her, please do visit her Just Giving page.  I was hoping to go and support, but it now falls at a bad time during my chemo cycle, so if you happen to be in Hyde Park next Saturday then please cheer them on for me!

Watch this space Jo’s Trust – I’ll let Sarah and Rob do the running for me this time, but I will be back for the next one myself!

2 thoughts on “Steps for Jo’s”