As you may know, at the moment I go to hospital every weekday for radiotherapy.  This can be at any time of day, but my appointments are usually late morning.  However, what is, in theory, a short visit can often turn into a stay of several hours due to having blood tests/seeing doctors/collecting prescriptions, etc.  By the time we get home, I am usually ravenous.

Recently, my breakfast of choice has been chopped fruit with various different cereals and milk.  I was delighted to be given the opportunity to try a new cereal, “Keep Me Going…“.  The name itself was appealing – anything that could effectively fend off hunger pangs until I get home is of interest at the moment!

The cereal has five times less salt and half the sugar of various other ‘healthy choice’ cereals, as well as being naturally low fat and high fibre.  Which all sounds great, but only if it doesn’t taste of cardboard.

First impressions were excellent: the box has a lid with a strip to tear off to open it, so you don’t end up with a half torn up lid like I usually manage to achieve with most cereals.  The cereal itself looks like small brown pillows.  I tried it with chopped nectarine and milk. 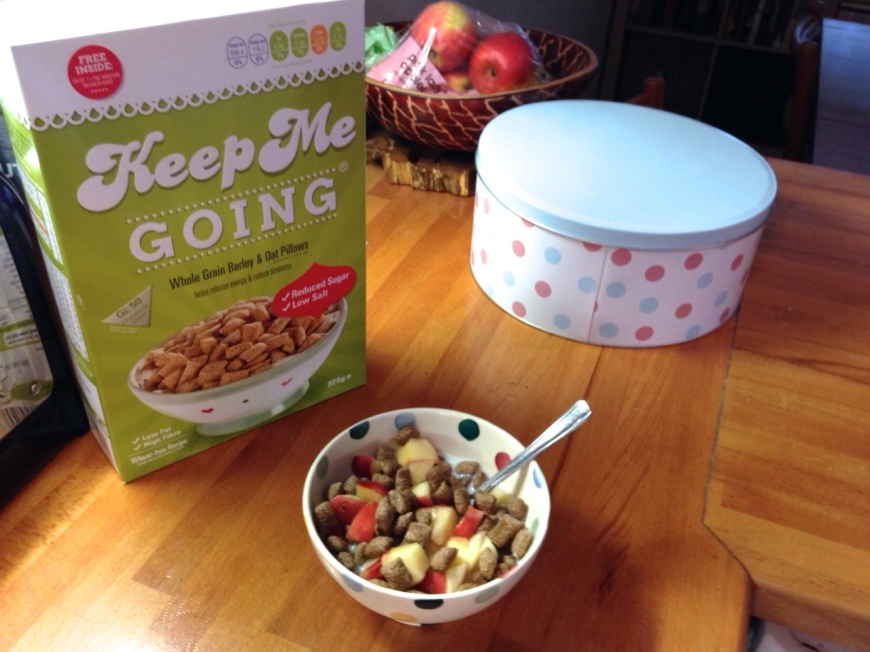 The grains involved are wholegrain oats and barley.  As well as that, the cereal also contains rye malt and sugar.  This means it does taste quite sweet and malty, which I like.  The texture was good too and the last few pillows at the bottom of the bowl, which had been sat in milk for some time, still had a satisfying crunch to them.

I have now had “Keep Me Going…” several times and I do think that it does what it says on the box.  I’ve noticed that I haven’t had that elevenses craving so much, which is useful when you’re stuck on a radiotherapy machine and couldn’t snack if you wanted to.

If you’re after a healthy, malty cereal that will fill you up then I’d certainly recommend giving this a try.

I was given two free boxes of cereal to try for this review.  All views are my own.  Photography and breakfast-making credits all go to my long-suffering boyfriend.