Hello Baking Better readers.  My name is Will.  I am Caroline’s boyfriend.  Actually, I am incredibly proud to say that I am now in fact Caroline’s husband, but i’ll come back to that a little later.

Now… Before I go one single step further with this update, I just want to apologise for a couple of things.

Firstly:  I would like to apologies for taking so long to update Caroline’s blog.  It’s been something I have be meaning to do for sometime, but probably haven’t due to the second reason.

Secondly:  I’m just not as funny as Caroline.  Nor will I be able to do this blog justice.  For those that have read this blog, you will know that it is an impossible task to try to write as well as she has done on here.

Caroline has a wonderful way of expressing herself.  Her dry and witty sense of humour comes through so well in every one of her posts that you can almost hear her.  She is without doubt the most intelligent person I have ever met and made speaking her mind seem so easy.

I guess i’ll start where she left off.  This one may take some time.

That morning Caroline woke me with a birthday kiss and a wonderful present.  She got me an Emma J Shipley Star Wars print!

Being a huge Star Wars fan it was (and still is) the best present ever and is currently hanging proudly on the wall behind me as I write.

Caroline and I then got ready for our day.  No food aloud before an operation, so just a cup of herbal tea, quick shower and off we went like so many days of last year, to the Royal Marsden.  True professionals.

We weren’t sure where the day would take us, but knowing whatever the outcome, we would tackle it head on, as always, together… a team.

We checked in to the ward, went through the usual questions, “name and date of birth?”, “hospital number?” and still laughed at the same old question “any caps or crowns?” us both imagining one day Caroline actually pulling a real crown out of her bag and placing it on her head.

I then begrudgingly had to leave Caroline and went to see one of my oldest friends who’d taken the day off work especially.   Surgery days were always fairly nerve-racking to say the least, so I found it best to stay busy and with good company (I guess one out of two isn’t bad).

It was a warm and glorious early October day, t-shirt weather, so my friend and I decided to go to a safe place, the cinema.  We watched Sicario (a good film actually).

It was a very difficult day but was prepared for either news; removal of the mass with or without a stoma.

As like the very first operation back in February, I again knew rough timings.  If I had ‘the call’ before approximately 4pm, then i’d know if it was with or without the stoma, or as Caro would put it the “Rose smelling trump hole”.

Typically, I got the call at 4pm.

I can’t really describe the feeling I felt when my phone rang after the operations.  It’s quite unique.  I guess the best way I can describe it, is a heavy hollow hit.  As your phone lights up, pure fear rushes over you in a instant.  The ‘what if’s’ the ‘maybe’s’ and an overwhelming feeling of dread all come at once.  The thoughts and negative feelings that you have been trying to suppress hit you before you’ve even picked up your phone.

I answered the call and it was our incredible Macmillan Clinical Nurse Specialist, yes the one I told to get out in one of Caroline’s previous posts (https://bakingbetter.co.uk/2015/03/27/my-boyfriend-tells-a-nurse-to-get-out/).

When I heard the tone of her voice, I knew things hadn’t gone to plan.  She just kept telling me that I needed to come to the hospital as soon as possible.  I was so scared.  Fearing the worst, I demanded that she tell me if she was alive or not.

“Caroline is okay, but they couldn’t remove the mass.  I’m so sorry Will.”

I hung up the phone and my world crashed around me.  I really wasn’t prepared for this.

My good friend did what he could, pulled me together and told me to get to the hospital, safely.

I arrived at the Royal Marsden and was greeted by our Macmillan Nurse.  I could see she had been crying.  We hugged.  I was then ushered to a small room to then be joined by Caroline’s surgeon. He explained all that had happened.

Sadly they couldn’t remove the pelvic mass.  It was un-manoeuvrable and stuck to both bladder and bowel and there was nothing that could be done.  During the process the surgeons also decided it was best to give Caroline the stoma to relieve some of the pressure that was forming and help with potential pain she may have in the future.

I then had to pass on the bad news to her family.

I waited outside Intensive Care Unit (ICU) till it was okay to see Caroline, I had never been so desperate to see her.  I needed to be with her more than anything in the world, but when I did, it hurt like nothing I had ever felt.  Even in her heavily medicated state, when she woke she still managed a rise smile and said “Hi Wilsey” and told me she loved me.  I couldn’t help but cry.

She was so confused when we had to explain what had happened, in fact it wasn’t until the following day she truly came to terms with it all.

The operation had taken its toll on Caroline and we spent the following days/weeks being looked after by the wonderful nurses at the Royal Marsden in the Ellis Ward, but sadly the future didn’t look good.

Caroline came home on the 25th of October and greeted by a very happy Ida (our cat), but sadly had to go back to the Marsden a week later with a high temperature.

In the coming weeks while we were there we had a few meetings about further procedures but were repeatedly told that first Caroline had to recover from the operation.  We were also told that it was likely that any further treatment would only prolong Caroline’s life.

With that earth shattering news… on the 5th of November 2015, in the family room of the Elis Ward, as we watched the fireworks light up the sky,  I asked Caroline to marry.  Seemed like the fitting day as Caroline was obsessed with fireworks.  Her face would light up whenever she saw the burst of colour.  She would always look at me with her goofy grin and say “BOOM! BIG BADA BOOM!”.

She made me the happiest man alive and accepted. 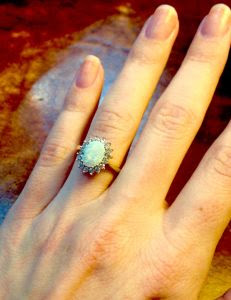 We were back home again by the 10th of November 2015,  and had a lovely few days wedding planning, looking at venues, making the longest guest list in wedding history and mainly getting very excited.  We even went ring shopping on 14th!

But unfortunately on the 15th I had to take Caroline back in the Royal Marsden, as once again she had a high temperature and her other symptoms were getting worse.

By the 20th things had escalated further and we were advised to get married in the hospital.

Thanks solely to our incredible friends, wonderful family and the completely brilliant staff at the Royal Marsden.  They all teamed together and managed to arrange absolutely everything in such short notice.  On the Tuesday the 24th of November 2015, my darling Caroline and I got married.

She put her absolute all into getting married.  It was without doubt the happiest day of my life.

A week later, on Tuesday the 1st of December 2015, my best friend, my wife, Caroline peacefully passed away.

Since that day there isn’t a second that goes by that I don’t miss Caroline and I long to be united with her once again.  She really was my everything.  My sole mate and truly one of the most incredible people I have ever met.  She was kind, caring and charismatic.  Beautiful, endearing and totally adorable.  Not to mention devilishly funny.

And I still to this day, have no idea what on earth she was doing with me!?

Apologies for rushing toward the end.  I intend write more in depth about certain parts (the wedding!) at a later stage.  But for now, I think thats as far as I can go.

I hope to continue to write Caroline’s blog the best I can.  I will try to cover the highs and the lows that have been through this year.  With an aim to maybe help others on a similar journey, but mainly to try and make Caroline proud.

Who know’s… I may even do some baking!

All my love Caro. Forever yours.

Apologies for the radio silence.  I’ve been caught up in a whirlwind of lethargy since my last operation the other day.  My next surgery has crept up on me and is now tomorrow, so I wanted to shoehorn in an … END_OF_DOCUMENT_TOKEN_TO_BE_REPLACED

As you know, September is Gynaecological Cancer Awareness Month.  To coincide with this, GynaeHealth UK have launched a campaign called Target 100,000, with the admirable aim of getting more women involved with cervical screening.  The campaign introduces a new, at-home HPV … END_OF_DOCUMENT_TOKEN_TO_BE_REPLACED

How do you know if it’s true love?  Perhaps it is when you can’t stop thinking about someone.  Or maybe you can’t stand the thought of not being with them.  Or could it be moving in together, or getting a … END_OF_DOCUMENT_TOKEN_TO_BE_REPLACED

If you have been on Oxford Street recently, you may have noticed Topshop’s fantastically floral window display.  It features three mannequins with flowers strategically placed over their bits, wearing grey jumpers with ‘LADY GARDEN’ emblazoned across them. Lovely as the … END_OF_DOCUMENT_TOKEN_TO_BE_REPLACED

Due to popular demand (one person asking), I am going to share the recipe I used recently to make two reasonably successful batches of plum jam.  We’d been struggling to decide quite how to use up the glut of Victoria … END_OF_DOCUMENT_TOKEN_TO_BE_REPLACED

Breaking news!  Yesterday was my 33rd and last radiotherapy session.  This slightly took us by surprise, as up until our appointment with the oncologist on Tuesday we had been expecting to go until next Tuesday.  I’m not complaining though!  We … END_OF_DOCUMENT_TOKEN_TO_BE_REPLACED

As you may know, at the moment I go to hospital every weekday for radiotherapy.  This can be at any time of day, but my appointments are usually late morning.  However, what is, in theory, a short visit can often … END_OF_DOCUMENT_TOKEN_TO_BE_REPLACED

I’ve been overwhelmed by the response to my last post, ‘On being positive‘.  Thanks so much to everyone who has read and appreciated it; I’m delighted to have written something that people have found helpful and insightful. The thing that … END_OF_DOCUMENT_TOKEN_TO_BE_REPLACED

Something that my boyfriend and I have heard many, many times over the last seven months is all about the importance of being positive. I am sure that having a positive attitude towards cancer treatment and recovery makes a huge … END_OF_DOCUMENT_TOKEN_TO_BE_REPLACED